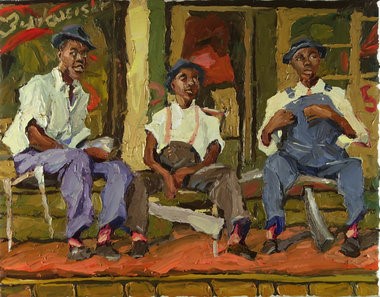 “Gentlemen at Floyd’s” is one of Mark Singer’s interpretations of images from Clarence Cason’s 1935 book “90 degrees in the Shade.” (Submitted photo)

HUNTSVILLE, Alabama – Ken Rivenbark is always looking for interesting items for his antique store, and he likes old books, especially ones about Alabama and Huntsville history.

One recent find, however, provided more than a book to sell in his shop. It became the inspiration for a series of paintings Huntsville artist Mark Singer has created for an exhibit that will be at Rivenbark & Roper Antiques for the next two to three weeks.

It was the title of the book that caught Rivenbark’s attention – “90 Degrees in the Shade,” which is a saying that refers to the heat of a Southern summer.

“I was intrigued by the title,” Rivenbark said one day last week at his shop on Bob Wallace Avenue. “I flipped through it, and then I started reading.”

He soon was on the Internet, researching Clarence Cason, the author of the book, which was published in 1935. He found out Cason was a professor of journalism at the University of Alabama when he wrote the book, which is based on a series of Cason’s essays on Southern subjects.

In the book, Cason provides a compassionate look at the way in which poor people, black and white, were taken advantage of and in which blacks were subject to sometimes violent racism.

Cason does not pass harsh judgment in the book, but rather looks at Southern culture from an intelligent, thoughtful perspective, Rivenbark said. Cason, however, began to fear how the work would be received, so much that he committed suicide days before the book was released.

In a forward to a 2001 reprinting of the book, University of Alabama journalism Professor Bailey Thomson describes how ill at ease Cason was and quotes from a letter Cason wrote to a friend not long before the book came out:

“I am convinced it will be exceedingly difficult for me to remain in Tuscaloosa after the book is published,” Cason wrote.

“At 39, he felt he had to kill himself in fear of how he would be perceived,” Rivenbark said. “That’s pretty powerful.”

In the book, Cason examines the slow pace of life Southerners led, attributing much of that to the hot climate that left people listless – hence the book’s title. He also tells stories about how merchants would keep illiterate blacks and whites in their debt by charging exorbitant interest rates, among other mistreatment.

In his book, Cason was able to see past prejudice to appreciate the people he writes about, which is another thing that appealed to Rivenbark about the work.

Rivenbark is a longtime educator, first as a classroom teacher and now as a consultant, and “one of my passions is bringing forth the uniqueness of every individual,” he said. “I love the idea of going back in history to find someone who had a like mind and cared enough to promote the lives and stories of these less fortunate Alabamians.”

He also enjoys working on projects with Singer, whose work he carries in his store.

For the show, Rivenbark “tasked Mark with the idea of coming up with reflective images of rural Alabama in the 1920s and 1930s,” he said. Some of the paintings are interpretations of photographs in Cason’s book as well as descriptions of events.

“Mark and I work well together,” Rivenbark said. “I’ll describe the idea of what I’m seeing and then he usually gets excited and takes it to a different level. On some small level, it allows me to be an artist even though I can’t paint. I can imagine.”

It’s also a way for Rivenbark to use his business to explore his interest in teaching and informing. Through the paintings, he hopes to introduce people to Cason .

“I want people to know about this book and his work,” Rivenbark said. 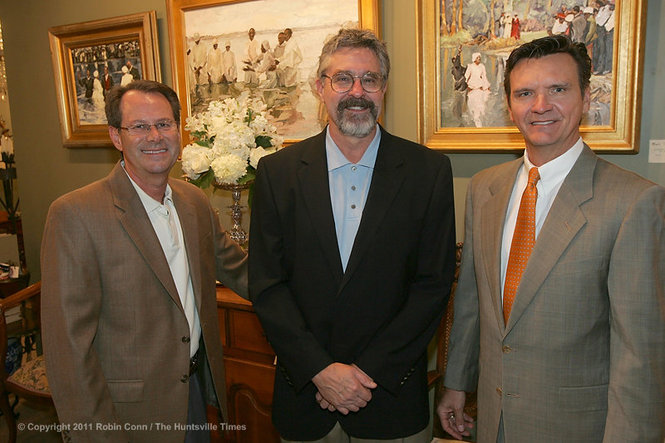